skip to main | skip to sidebar

NOT SO.  February is the month to learn about flowers starting with the romantic rose.

60% of the roses sold in the US are grown in Colombia -most the remainder are grown in  Ecuador where climate and labor conditions are very similar.

During high seasons, including Valentine’s Day and Mother’s Day, Colombian flower workers are expected to work 12-16 hour days. Employers pressure workers to produce impossible quotas and threaten workers if they do not achieve them. Many women workers have temporary contracts.

Flower workers are paid the minimum wage of about $215 a month, or $8 a day.  Women are the majority labor force.

Workers are exposed to high levels of toxic chemicals.

Many women have reported health problems ranging from headaches, blurred vision, intolerance to light and nausea to more serious problems, such as experiencing still births, sterility and birth to children with abnormalities and defects.

In Colombia flower workers have struggled for years for better working conditions. The first union established (2007) disbanded in 2008 due to constant paramilitary threats to members and leaders. (in Antioquia)  Dole Plantation (in Bogotá) accepted a union then within a year (2009) sold their  Plantation (buyer not known).

A.J. gives volunteer leadership to displaced peoples now living in Atlanticó (Department). He’s a farmer, displaced twice. He’s been unemployed the last 2 years.
Today he received news that a long awaited family subsidy* arrived but was returned to Bogotá. He was advised not to contact the Bogotá office before Jan. 15 due to holidays.

ANDESCOL, The national association of displaced people of Colombia functions through the goodwill, passion, and volunteerism of thousands, from Human Rights lawyers to the many community leaders throughout the country who are the displaced.
Community leaders such as A.J. stay in touch through cell phones which can receive calls at no cost. One can make a quick call for equivalent of 10 cents from the multitude of street vendors.

I heard these worries in our conversation today:
• There’s no food in the house
• Christmas is coming; his 3 children don’t have shoes
• In a generation’s time the knowledge of family and community based agriculture may be lost. A generation of displaced farmers –Afro Colombians, indigenous people, and others, are in urban zones, separated from the work they know. Their children are growing up in urban settings, and will not know how to till the soil.
• Few people know their rights as citizens, or International Humanitarian laws, or Colombia’s laws regarding reparations for civilians displaced by war,and their right to lands that were –and are still being, confiscated.
• Where to get funds to carry out education workshops (capacitaciónes) to teach people their rights. The government funds many workshops for the displaced to learn new work skills, i.e., welding, furniture or soy yogurt making, etc., through contracts with training entities. Sadly, the people A.J.knows have not been able to find or generate income related to their various trainings.


“The [OT] prophets take us to the slums.” Rabbi Joshua Abraham Heschel
Posted by Phyllis Dintaman Stutzman at 12:41 PM No comments:

Advent – Hearing
Here's the link to an Advent meditation by Richard Williams who very recently joined the Colombian Presbytery for as a "permanent" accompanier -for 3 years.  His refers to a worship service we attended in Sincelejo, Colombia.
Posted by Phyllis Dintaman Stutzman at 7:25 AM

More Than A Headache

Mounting analysis and opinion reports the US use of Colombian Military bases has become a headache for President Uribe even before the bases are fully operational. This Military plan isolates Colombia within the continent --Peru and Mexico who have not spoken against the bases simply stay quiet, the US government refers to the plan publicly as a “bureaucratic error” and the FARC (guerilla group) has found a new voice “unimagined in its most golden dreams.”

Initially claims were the stepped up US military presence was essential to control “narcoterrorists” since Plan Colombia is “decaying.”  (fails to stem the flow of cocaine to US markets)  However Colombia’s neighbor,Venezuelan President Chavez, has maintained that the US has bigger plans, including to overthrow him, and to use military force against the social movement he leads in Latin America.  FARC leaders are incorporating into this social movement Bolivariana which many progressive leaders regard as extremist, anachronistic and out of step with the times,  But as details of the US Military agreement become know, Chavez’s views gain ground, credence and international attention.

From the high hill, rugged and dry in Piojo where displaced families now live we looked down at the wide expanse of flat agricultural lands and the broad river flowing into the Pacific.  This agricultural land is sited for a new international airport.  The existing Barranquilla airport is slated to transform to exclusive use by Colombian and US Militaries. The new civilian airport would provide easier access for potential new owners of yet-to-be built condos and hotels along the Pacific. 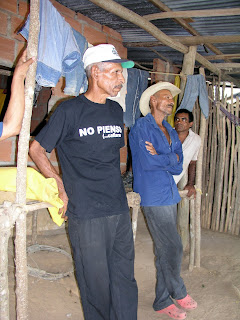 What kind of development brings peace? What is justice?  And Human Rights for the Displaced?

Posted by Phyllis Dintaman Stutzman at 8:41 AM No comments:

“Es muy complicado” is a semi-humorous code to denote “there’s more than meets the eye in this situation” or the presence of particular risks in particular places.
"I’d like to go for a walk. Response: “It’s very complicated”
However some things are not so complicated.  Here are two:
1. Regions with the highest displacements are the areas that have strategic natural resource wealth.  Coal, for example.
In La Guajira (Department) Cerrejón, a consortium of 3 international partners operates the world’s largest export open pit mine. In César Department Drummond, headquartered in Arkansas, is on course to be even bigger.  Both operations are expanding at breakneck pace in the Caribbean region of Colombia.  Simply put, paramilitary forces* have ways to move people and communities who are in the way of large scale resource exploitation.
Both Departments have significant Indian and Afro-Colombian populations who for generations have lived in traditional ways, relatively isolated from national influence, practicing small scale agriculture,  They are the displaced of Colombia.
A growing number of threatened groups are organizing to resist the pressures and tactics to force them from their land.  Several communities are acting to reclaim their land after fleeing violence. They are designated as “Peace Communities” and “Communities of Resistance.” They prohibit armed individuals or groups –Police, Military,  Paramilitaries or Guerillas to enter their communities.  At great cost they are beacons of Peace.
2.  US and Colombia governments signed a pact for US military use of 7 Colombian military bases.  There is not a shred of evidence that military force solves the deep socioeconomic problems that beset Colombia or the US.  Simply put, the US greatly underestimated the continent-wide outrage against more US military operations in Latin America.  The history of US military intervention is long and horrific.  Latin America governments, with the serious exception of Colombia, no longer trust military forces to resolve longstanding injustices.  Much less to bring peace.
The Teusaquilla Mennonite Church hosted a 2 day Study and Vigil of Indignation for the Installation of US Military  Bases in Colombia. (Análisis y vigilia de indignación por la instalación de bases militares estadounidenses en Colombia.)   Many are speaking out against the military plan imposed on both Colombia, Latin America and the US without official involvement of either Colombian or US Congress or Courts.
*Paramilitary: Those in charge to do dirty work (i.e., illegal actions). 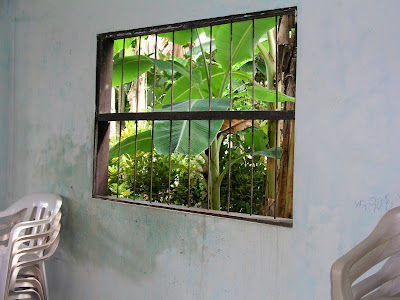 view from church comprised of displaced people, including pastor.

How do you think peace can be achieved with more than 4 million people displaced through violence? Even as displacement, as a terror tactic, continues?
Posted by Phyllis Dintaman Stutzman at 12:28 PM No comments:

“I lived in the mountains of Magdalena where crystal clear, cold, uncontaminated water flowed in abundant streams.  We never lacked pure water. When I heard about this place above Piojo  two years ago I imagined it would be like the place I lived in Magdalena.”

“Piojo is not anything like Magdalena. Now I bathe, wash clothes and dishes in water I carry from a stagnant pond the cattle use.  A burro carries jugs of drinking water  from the town below the mountain.” 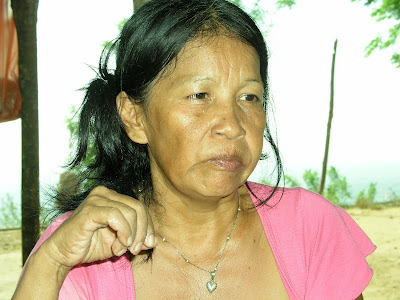 The land, the mountains around Piojo are tropical dry forest, a biome that receives no rain many months of the year. Dry forests support flora and fauna completely different than wetter regions in the tropical regions of the world.  Adding to the challenge, climate scientists as well as Colombian campesinos are keenly aware of changing weather patterns.  Planting times and crop development is disrupted.

In 2009 the small group of 8 households who moved to Piojo experienced severe drought.  Extremely limited rains came during the time rain was expected.  The corn and rice they were accustomed to plant in other regions failed.  Most of the households are sustained economically by young adult children who work in cities.  They eat yucca which tolerates dry soils, and occasionally kill a chicken. It's costly to buy them feed. 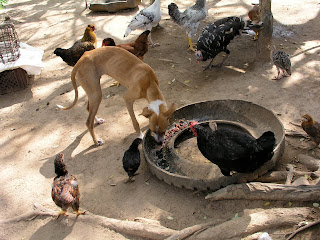 Colombia has a beautiful law that promises land to those who have been displaced from their lands by violence.  But not the same land they fled after massacres and disappearances by the paramilitary forces.  Angelina’s land and her neighbors' rapidly became an african palm oil plantation with a corporate owner.

ANDESCOL (Association of Displaced Colombians) accompanied by international and national humans rights group, and churches presses the government to comply with the law.  Their success is extremely limited though government land scandals have been revealed. 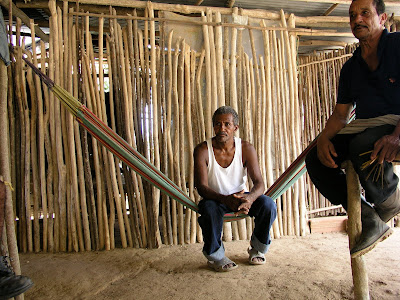 “We are country people and do not feel well in cities.  We have a right to live.  We need land to feed our families and a safe place to live.” 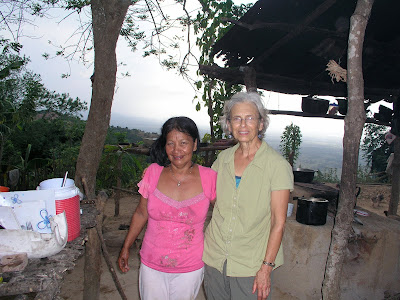 Catholics (and many others) likely are either incredulous or simply wondering  how – when - where Noche de las Velitas, which is the celebration of the Immaculate Conception of Mary, became an expression of Mennonite peace theology.  (Dec. 7 post) 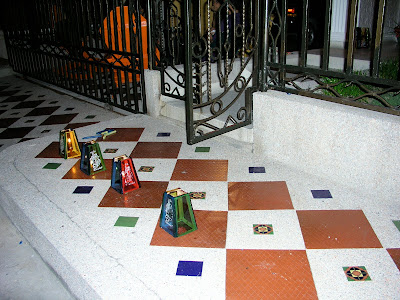 Thanks Richard for teaching me the Catholic meaning for this important Dec. 8 tradition. 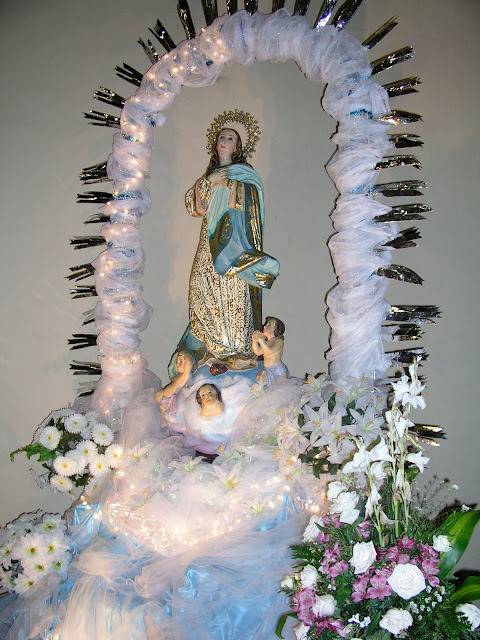 Dec. 8 at Principal Cathedral in Barranquilla
Posted by Phyllis Dintaman Stutzman at 12:33 PM

Phyllis Dintaman Stutzman
Goshen, Indiana
January 25 through March 30, 2011 I am an accompanier with IGLESIA PRESBITERIANA COLOMBIA (IPC). I am in Barranquilla, also in Urabá, a region close to Panama. During this ecumenical journey I'll describe how people of faith are constructing peace in a country where the government is banking on military solutions. Acompáñanos,Oct. 2009 post describes the word + map + why. Visit http://www.ipcol.org to see photos of fine friends and our purpose.